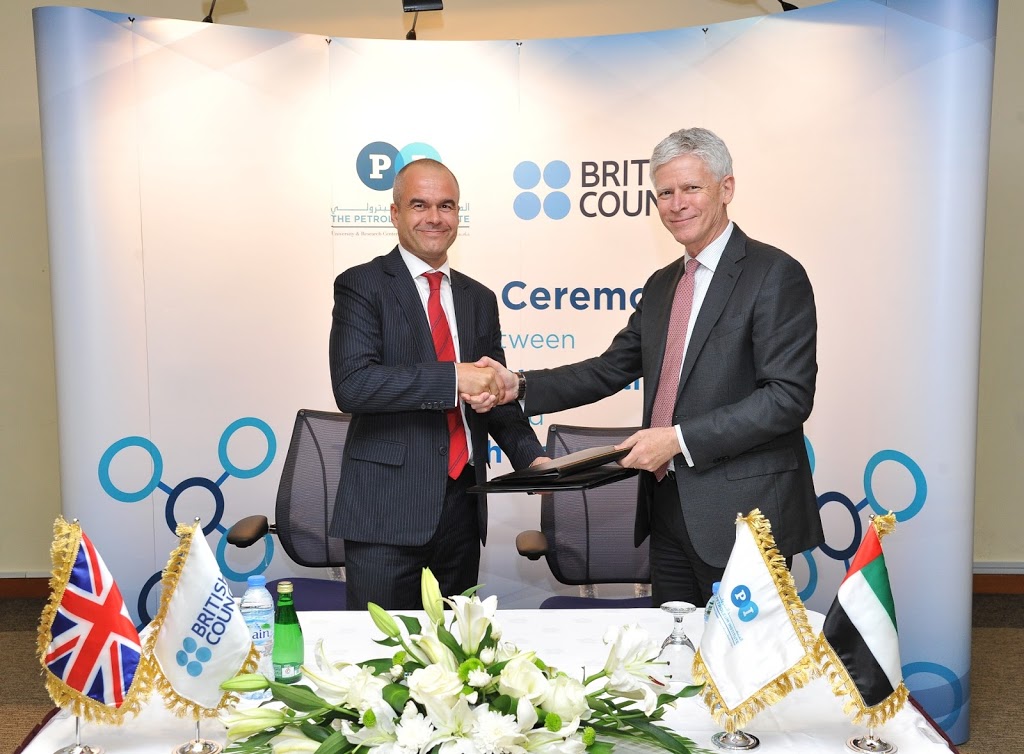 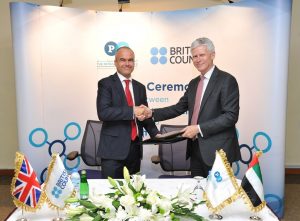 The agreement was signed at the headquarters of the Petroleum Institute in the presence of representatives from The Petroleum Institute and the British Council, UAE. Dr. Thomas Hochstettler, President of the Petroleum Institute signed on behalf of Petroleum Institute and Mr. Marc Jessel, Country Director, British Council UAE on behalf of the British Council.
On this occasion Dr. Thomas Hochstettler, President of the Petroleum Institute said: “The MOU marks a significant milestone for us at the Petroleum Institute.  This agreement will most assuredly facilitate the development of our students as productive, articulate contributors to the culture and prosperity of the nation.  We welcome with enthusiasm this opportunity to partner with the British Council for our mutual benefit in the future”.
Dr. Murray R. Gray, PI Senior Vice President Academics & Provost said: “The Petroleum Institute is committed to preparing its graduates for service to the UAE and for international success. They need a high level of competency in English, and the British Council offers us the best tools for judging their ability to read, write, speak and listen. This MOU will enable us to integrate language teaching with testing in a seamless way to give our students the best launch possible for their academic careers.”
Dr. Muna Balfaqeeh, Director of Academic Bridge Program Said: “As the Director of the Academic Bridge program, I am very proud that this agreement will expand our collaboration with the British Council, and make the Petroleum Institute a certified venue for language testing.”
Mr. Marc Jessel, Country Director UAE praised the Petroleum Institute on the occasion and said, “The British Council is honoured to have signed this partnership with the Petroleum Institute that will provide students from the university with the internationally recognised and accepted IELTS qualification.  This partnership represents our continued commitment of supporting the leading Higher Education institutions in the UAE, by providing qualifications that recognise their ability to communicate in English, which is becoming a valuable 21st Century skill sought after by more and more international employers. “He further added, “British Council’s IELTS is the world’s most popular English language proficiency test for higher education and global migration, with over two million tests taken in the last year alone.”
IELTS is now accepted by more than 9,000 organizations in 135 countries around the world, including educational institutions, employers, governments, immigration authorities and professional bodies.
About Petroleum Institute (PI)
The Petroleum Institute University and Research Center (PI) was established in Abu Dhabi, capital of the United Arab Emirates in 2001 with a goal of becoming a world-class institution in both engineering education and energy industry research. PI currently has over 1900 undergraduate and graduate students, over 200 faculty, and has quickly become a leading teaching and research institution in the Middle East region. The PI’s sponsors and affiliates include the Abu Dhabi National Oil Company (ADNOC) and four major international oil companies: BP, Japan Oil Development Company, Shell and Total. The campus has modern instructional laboratories and classroom facilities, and will soon host a major research center, the PI Research Center (PIRC) scheduled to open later in 2015.
For more information, visit www.pi.ac.ae
About the British Council
The British Council is the UK’s international organisation for cultural relations and educational opportunities. We create international opportunities for the people of the UK and other countries and build trust between them worldwide.
We work in more than 100 countries and our 8,000 staff – including 2,000 teachers – work with thousands of professionals and policy makers and millions of young people every year by teaching English, sharing the arts and delivering education and society programmes.
We are a UK charity governed by Royal Charter. A core publicly-funded grant provides 20 per cent of our turnover which last year was £864 million. The rest of our revenues are earned from services which customers around the world pay for, such as English classes and taking UK examinations, and also through education and development contracts and from partnerships with public and private organisations. All our work is in pursuit of our charitable purpose and supports prosperity and security for the UK and globally.
For more information, please visit: www.britishcouncil.org. You can also keep in touch with the British Council through http://twitter.com/britishcouncil and http://blog.britishcouncil.org/.